200 Years of Chairs by Woody

Original Woody family chair shop with water wheel, which was used to run the lathe in the wood-shop.

Step back to the late 18th century when Wyatt Woody first set foot in the county and begun a tradition that endures to this day.

Wyatt started from the local hardwoods and ended with handcrafted chairs (so-called because of the way the back posts of the chairs stick up like ears on a mule) that he bartered for his family needs. These were greenwood chairs with no metal fasteners or glue used on the weight bearing structural parts. Chair posts air-dried, then parts driven together tightly, rounds interlocking. As the posts dried they shrunk onto the rounds clamping them tight. And at Woody’s Chair Shop today, that technique is still used.

The business passed from family to family, first to Martin who continued supporting his family by turning out hand-made chairs, and then to Arthur Woody, the third generation of Woody chair-makers and among some of the first instructors at Penland School of Crafts. He and his daughter, Miss Decie, taught the art of seating chairs with hickory bark at Penland’s newly established Related Crafts department. They were Lucy Morgan’s neighbors and friends. In her book, Gift from the Hills, Lucy wrote of Arthur and his three grandsons, concluding, “We have craftsmen in our mountains!”

Wyatt’s great-great grandson Arval and his brothers, Walter, Paul, Frank, and Floyd, picked up the chair business after the war. Although Arval had been hanging around his grandfather’s wood shop since the age of 6, he didn’t decide to carry on the tradition until he returned from World War II and discovered that jobs were hard to come by. From his knowledge gathered from early years of watching and learning, wood from his father’s sawmill, and a desire to make the best chairs available from the pride innate in the legacy of his family, Arval and Walter kept the chairs coming as his brothers followed other paths.

When Wyatt began producing chairs, the cost was perhaps a bolt of cloth or a couple of cans of coffee. Arval’s grandfather sold them for 3 for $1 when an acre of land went for $3. When Arval and his brother began making the Betsy Ross chair (modeled after the one she likely sat in while sewing the American flag), the price tag was $7. Now a Woody’s chair is displayed at the Smithsonian Institute’s Museum of Art and Design and in some of the finest homes around the world. In 1952 through a connection with Terry Sanford, then Governor of North Carolina, three of Woody’s chairs went to the White House, one for President Kennedy, the other two for his children, Caroline and John, Jr. But that White House commission wasn’t Woody’s proudest accomplishment. That was reserved for being named a North Carolina Living Treasure by the UNC Wilmington Institute for Human Potential.

Arval Woody summed up the fine tradition of chair making that Woody’s has come to represent in one short sentence, “We get the tree in the forest, and when we finish it up, it’s in the living room.”

Imagine the hustle and bustle of the city. One big both in mass and reputation with skyscrapers breaking the horizon line with ease. The other small but not lacking in reputation as monuments and museums can be found on nearly every street. Now imagine leaving those cities for the Blue Ridge Mountains and Mitchell County with a generous population of a bit over 15,500 and an area of 222 square miles.

I was offered a job at Penland,” said Stacey Lane Kline, a metalsmith and jewelry artist, “thinking I would only be here for two years. But then I met Michael, and we ended up sticking around.”

Stacey’s studio is carved into Michael’s pottery building, that takes point up on a hill behind their house. A full-time potter, he makes tableware, as he calls it, things he, his friends, and customers use daily. Most of his pieces reflect detailed, repetitive designs. The contrast between the glaze and the patterning creates an elaborate, identifiable look that is seen in shops and galleries around the country.

“Actually, the more intricate and process-oriented I get, the more excited I am about the work,” Michael offered, “Whether it’s painting or using wax resist, and stamping or other treatments, I think it’s all very process-centered.

At the other end of the studio, Stacey works in wax creating jewelry that is then cast in repurposed metals, such as bronze or gold. Her technique is called lost-wax casting. The artist molds the wax to the intended design then casts or molds in hot metal. As the metal cools, the wax melts, leaving the jewelry cast behind.

“I start with soft wax and build structures,” she explained. “The wax is easy to manipulate. Instead of carving into it, I build it up.”

The Klines came from big cities: Stacey from Washington, D.C. via the University of Georgia where she got her degree in art history; Michael graduated in Massachusetts then moved to New York City. Both worked in the arts.

“That’s one of the main things I took early on was that I could make a living at this,” Michael said considering his choice of craft.

Both found themselves at the Penland school for different reasons. Stacey became part of the Penland staff; Michael became a residential artist. They met in the “small world of Penland,” according to Michael. Now they, along with daughters Evelyn and Lillian, little dog, and several chickens, make their home about 10 minutes away from the school.

“I love that there is an art community here, and I definitely feel a part of it,” Stacey said, “I think artists are great community members, tend to be very active in supporting local businesses, and really understand the networking that goes into sustaining a community.”

Michael’s and Stacey’s work can be found in local and regional galleries. Michael hosts workshops around the country; Stacey works as community collaborations manager at Penland. And they are heavily involved in the community.

“There is an element of support, like the mentorship of younger artists and then the younger artists looking to up their game,” Michael said, “I realized early on that, ‘wow this is an awesome place; these people are good.’ So, I want to bring my A-game.”

And when it comes to games, Michael and Stacey definitely play on the A-team. 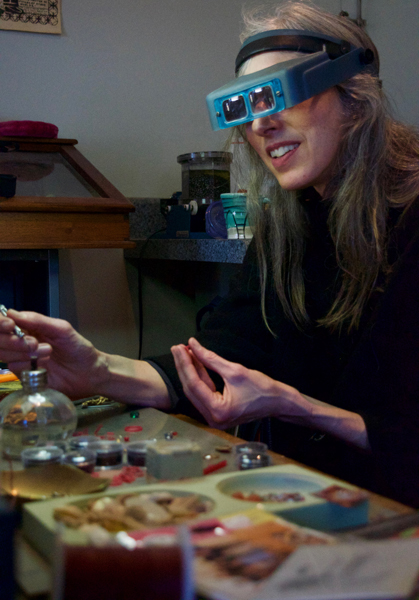 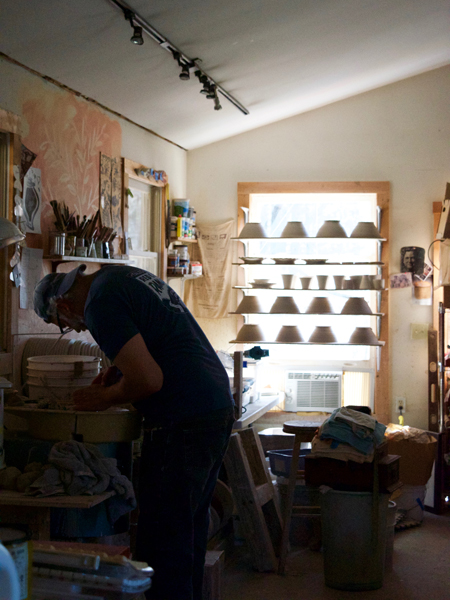 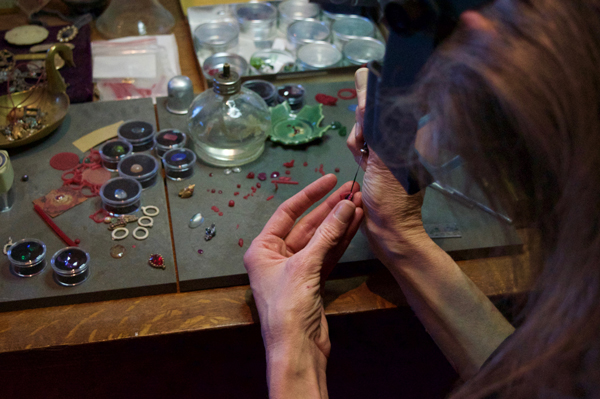 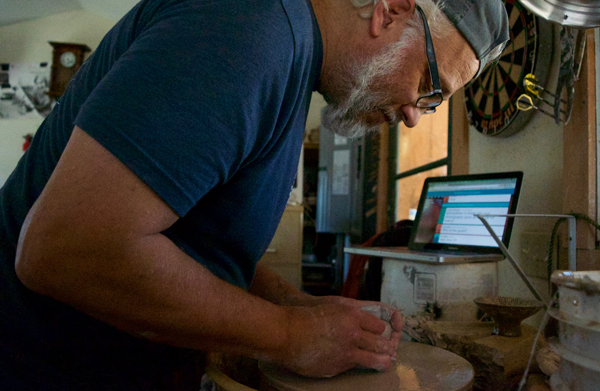 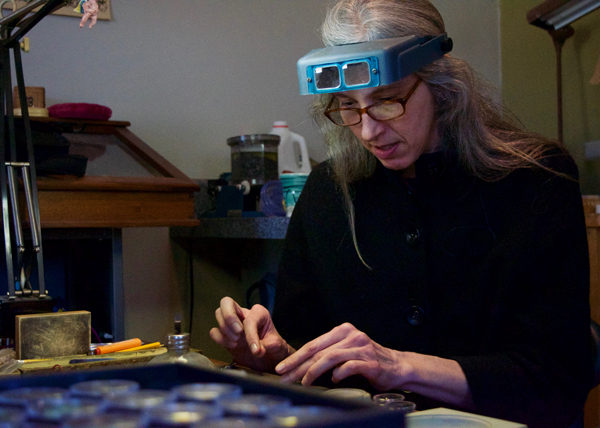