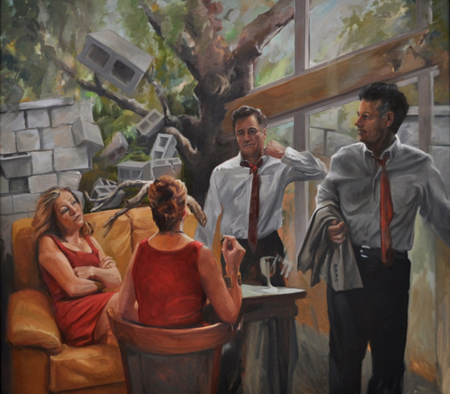 Inheritance is comprised of four artists whoÂ work independently, but share the inheritance of many traits that unify and guide their art. Jill Eberle, Kiki Farish, Jane Wells Harrison, and Jerry Jackson share one primary bond, Paul Hartley, painting professor at East Carolina University (1970-1972 and 1975-2008). Not unlike hundreds of other successful artists around the country, the four exhibiting artists have benefited greatly by the many talents of Hartley. He was a masterful teacher who possessed clarity of insight which he could impart with few words. Paul was a teacher, mentor and friend.

Following his untimely death in 2010, a memorial exhibition, The Paul Hartley Legacy, was presented by Lee Hansley Gallery in Raleigh, NC. In a tribute publication, Kiki Farish wrote â€œPaul spoke of building a world within a format in which all the elements belong.â€ This statement obviously references the compositional and aesthetic aspects of a work of art, but it also references the commonality of each exhibiting artist and a strong sense of belonging. Jill, Kiki, Jane and Jerry have had various connections beyond ECU and currently live across North Carolina from Penland to New Bern. Over the past 10 + years, they have grown as artists and friendsâ€¦no matter how infrequent the visits or conversations occur.

During January 2016, Jill, Kiki, Jane and Jerry had the opportunity to reunite for two weeks in a Winter Residency at Penland School of Crafts. The goal of each artists was to have uninterrupted time to create and to conduct frequent critiques. This opportunity gave light to new ways of working, new materials, fresh ideas and the realignment of friendships.Â

Reception will be held Saturday, September 15 from 5 to 7pm.