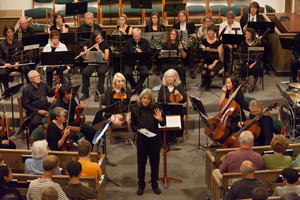 The Toe River Chamber Ensemble invites the public to their Annual Spring Concert.

The concert is as diverse as this springâ€™s weather. From well-loved â€œStars and Stripes Foreverâ€ by John Philip Sousa to selections from the Star Wars cinematic block-busters, the Toe River Chamber Ensemble will offer a challenging program featuring several full orchestra selections including, â€œDanse Macabreâ€ composed by Camille Saint-Saens in 1874. The original, known as a â€œtone poemâ€ because it evokes the content of aÂ poem or other non-musical source, was not well received due to its innovative sounds, but today, audiences applaud the almost dark tones that fill the background in many current films.

Then itâ€™s a change of pace when the Yancey County Middle School Jazz Band comes into the orchestra pit and joins in on â€œThe Star Spangled Banner.â€ Writing in 1814, poet Frances Scott Key was inspired by the largeÂ American flag and its 15 stars and 15 stripes flying triumphantly above Fort McHenry during a victory in the War of 1812. However, it took over 100 years to be recognized as the national anthem.

Led by Music Director at East Yancey and Cane River Middle Schools, Christine English, the Jazz Band continues solo with several renditions of their own favorites.