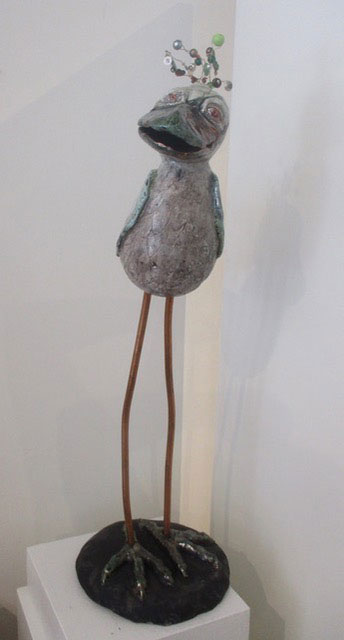 “I’ve always loved making art, especially sculptural pieces. I fell in love with clay in college, it seemed you could make almost anything with it. I was drawn to human and animal forms because they were a good vehicle for communicating ideas and feelings in art. I’m drawn to humor in art, and particularly like making whimsical pieces.

I lived in England and Wales for ten years in the 80s, and began making pieces with sheep and shepherds. I then branched out into making 3D versions of famous paintings.

I returned to the US in 1990, and lived and taught art in New Orleans until the levees failed in 2005 after Katrina. In 2006 I moved to western North Carolina. I have my studio in my home in the woods, near Spruce Pine.

In ceramics I usually work in low-fire techniques, including raku. I make many of my shapes on the wheel, and add figures to them. I have branched out into wood and found objects lately, using sticks and carved wood to represent figures.

At this time I exhibit my work mainly in the Toe River Arts gift shops in Spruce Pine and Burnsville, at Toe River Crafts in Celo, and also through Lemieux Galleries in New Orleans.” – Pat Benard